After my father died in November of 2000 several of his friends and collegues sent condolence emails, the one I am including is from Anthony J Mastromarino, PhD. Assitant Vicepresident for Research at MDANDERSON Houston,Tx.

Tony Mastromarino,PhD and Dr.Charles A Lemaistre both from the MDANDERSON Center were aware of the insulin treatment as my father since the year of 1966 got in touch with them and gave all the information and research he produced. This professional relation lead to the presentation of Insulin Potentiation Therapy at the 42nd Annual Conference on Cancer Research held in Houston on October of 1989 and several years later to an invitation lead by Mary Ann Richardson,MD, also from MDANDERSON to present the Best Case Series on IPT at the Third Meeting of CAPCAM, NCCAM, NIH., in Bethesda, Maryland on September 18, 2000, two months before Donato Perez Garcia Bellon,MD (1930-2000) the son of the inventor of IPT passed away on Thanksgiving day November of 2000.

Here is the email from Tony Mastromarino and following one of the letters sent to my father in February of 1989.

It was great to hear from you.  Sorry for the delay in responding.  I am retiring from M.D. Anderson at the end of this month after 25+ years of service. We will retain our residence in Houston, but will be spending about half the year in Maine at our summer home.  We will also be traveling quite a bit more. Our daughter got married last year and now lives in Heidelberg, Germany so we have a place away from home.  I am trying to get everything wrapped up here before I leave. It was great to learn that Paul Carbone is interested in participating in a clinical trial of IPT. That will add additional credibility to the treatment strategy.  I do admire your tenacity and perseverence---it will pay off!  It is admirable that you are documenting the history and development of IPT in writing.  As I recall your father had initiated such a project.
I believe the first time Steven Ayre and I met was at the 42nd Annual Symposium on Fundamental Cancer Research in October 24-27, 1989 in Houston.  The poster abstract he, your father  and you submitted was presented at that meeting, as you well know.  I'm not sure how long before that I first met your father on his travels to Texas.  I do  remember that  your father was referred to me on one of his visits wehn he called upon Dr. Charles A. LeMaistre (who was President of M.D. Anderson at the time)  and he was not available, but I can't recall the year.  I believe your father knew Dr. LeMaistre well before he joined M.D. Anderson.  Dr. LeMaistre is now retired and lives in Austin.  Your father was always  very kind and thoughtful.  Anytime he visited Texas he would call, usually from San Antonio or sometimes once he had arrived in Houston, and ask if I had time for him to drop by.   Of course, I remember very vividly the last time he visited and we sat in the lobby of the clinic building in the early evening talking about his latest studies as well as his family and my planned retirement.  I promised to let him know my plans and how I might be contacted.

I will always remember your father with fondness. 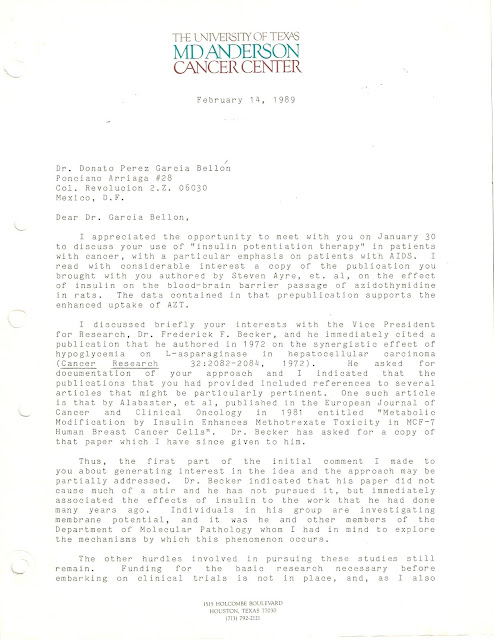 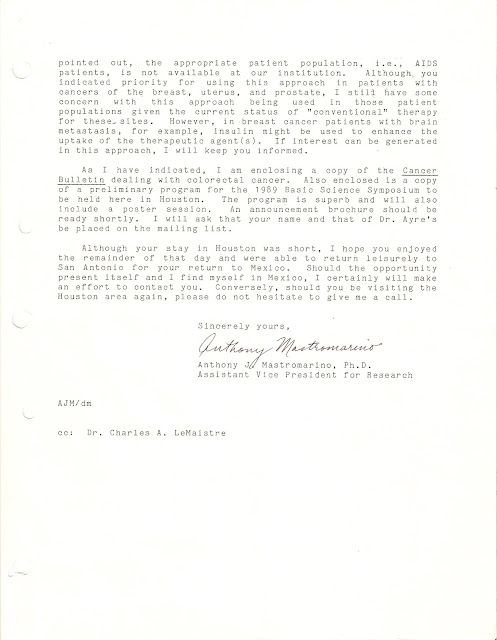 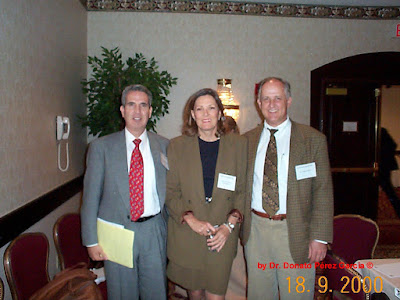 "Many people think that supplements aren't really medicine since they don't require a prescription and they aren't listed in the drugstore's over-the-counter medication area,"

Popular herbal and dietary supplements can interact with anticancer and other medications and alter the way they work in the body, making the drugs either more or less effective, or increasing certain side effects.

To find out more about how the supplements you're taking interact with drugs, use:
DRUG INTERACTION CHECKER
at December 05, 2010 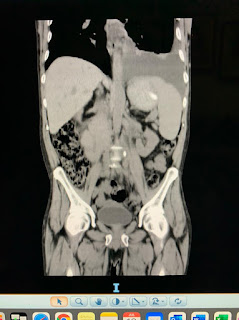