Insulin Potentiation Therapy was initially developed by my grandfather, Donato Pérez García, Sr. M.D.
IPT targets the treatment of a cell by changing the bio-physio-chemical constants and parameters of the blood. This pathway initially attacks the cancerous cell itself through its intra-cellular environment and extra-cellular environment by permeabilizing the cell membrane via insulin.

IPT is a targeted therapy for cancer and chronic disease; the power of chemotherapy is directed only to cancer cells and not a patient’s entire body. In addition, the chemo is delivered at a fraction of the normal dose. This approach eliminates or significantly reduces the dreaded side-effects of conventional chemo. IPTLD annihilates cancer cells by employing the very same mechanisms that cancer cells utilize to kill people.

Does anyone care to win the War on Cancer ?

Does anyone really care to win the War on Cancer ?

IPTLD or IPT as a treatment modality is in fact nothing more than low dose chemotherapy, similar to metronomic therapy, which uses insulin as a biological response modifier, thus targeting the cancer cells. There are numerous studies that show insulin makes certain chemotherapeutic agents more effective.

As a practicing IPTLD / IPT physician since 1982, I have found this form of treatment to be very gentle and very beneficial to most patients. There are several physicians, that I have trained since the year 2001, around the world that report similar outcomes.

IPTLD or IPT uses the same chemotherapeutic agents used in traditional oncology except in lower doses. The dosage is lowered to prevent damage to the immune system. The insulin, which may be considered an off-label use, acts to target the chemo agents only to the cancer cells. Off label use of approved drugs is a subject covered in the Book "Physician's Desk Reference" and it is permissible under FDA law.   In fact the vast majority of drugs approved by the FDA are used off label even in neonatal and pediatric situations despite the fact that these are very vulnerable populations.

Insulin has a very long history of safety.

The Boundaries between Practice and Research in Medicine have been bitterly debated by the insurance industry.  However, the 'Belmont Report' which is considered the gold standard of ethics and medical research, clearly dictates how "the practice of medicine and the research in medicine" should be conducted.

The IPTLD or IPT is considered by many third-party payers to be experimental or investigational but this is for the purpose of payment decisions. This suggests hesitancy by insurers to adopt new therapies and thus cost-containment by limiting claims.

The practice of accepted therapy is best described by the Belmont report. The Belmont Report delineates the boundaries between the "practice of medicine" and "research in medicine". The term "practice" refers to interventions that are designed solely to enhance the well-being of an individual patient and have a reasonable expectation of success. By contrast, the term "research" designates an activity designed to test a hypothesis and draw conclusions for general knowledge and use. Furthermore, according to the Belmont report, when a clinician departs in a significant way from standard or accepted practice, the innovation does not, in and of itself, constitute research. The fact that a procedure is "experimental" in the sense of new, untested or different, does not automatically place it in the category of research. Nevertheless, although IPTLD or IPT is different,  it has been well tested by hundreds of physicians, around the world over the past 80 years -since 1930-.

Investigational and experimental are terms of art whose meaning depends on context.  IPTLD may be legally performed without further authorization or approval by the FDA [or equivalent authorities] because IPTLD / IPT uses approved drugs.

The use of insulin is an off-label use, which is within a physician’s legally authorized privilege to perform. The FDA [or FDA equivalent authority in each Country] does not have the jurisdiction or the interest in interfering with off-label uses of approved drugs.

When the question is whether a physician may legally employ the IPTLD/IPT protocol the answer is that they may. Usage of combinations of drugs into a protocol are not subject to FDA [or FDA equivalent authority in each Country] approval and the protocol is not investigational or experimental, but rather a regimen that uses drugs in a mixture of approved and off-label uses.

In my practice the greatest majority of cancer patients are in stage III and IV. Prior to visiting my office, they have had all the traditional oncology work up and treatment with surgery, chemotherapy and radiation. Most only come to me and my IPTLD / IPT colleagues once they have failed the traditional approach and are sent home by mainstream doctors who feel they have exhausted their treatment options. Surprisingly the majority of these patients get a second chance in life with IPTLD / IPT treatment. Most of them live a peaceful and joyful life with their families without multiple hospitalizations, hair loss, weight loss or devastating infections. Some of them go into remission for a very long time. These patients eventually die in peace without dying every day from complications.

As an IPTLD / IPT physician I also see and treat cancer patients that absolutely and categorically refuse any form of traditional oncology treatments. As an IPTLD / IPT physician in keeping with the Hippocratic Oath, I feel obligated to help patients who have researched alternative methods and made a conscious decision to go in that direction. After all, these patients, like me, are citizens that live, work and pay taxes. They have a right to receive care from any legitimately trained physician of their choice.

As an IPTLD / IPT physician I applaud the marvels of Western Medicine, but I also believe in the freedom of choice. We are doctors, but doctors are sometimes patients too. These patients who undergo integrative therapies have given fully informed consent, and as in the case of conventional therapy, no cure is ever promised. As  an IPTLD / IPT physicians I am obligated to offer my knowledge and services to my patients without prejudice. Remember that for those that have failed traditional oncology treatments and who seek IPTLD/IPT treatments, having IPTLD/IPT available is a Godsend.   When one is faced with death they have every right to alternative treatments, especially when those treatments have been shown anecdotically through the past 80 plus years to be safe.

IPTLD or IPT should by all rights be in the mainstream, but for the fact that insurers look for any excuse to call any less common procedure investigational.

The public demands freedom of choice, especially when variations of chemotherapy - both low and high dose are in the literature and being done at major institutions such as Mayo Clinic and Hospitals around the world.
Posted by Dr.Donato Perez Garcia at 9:45 PM Links to this post

Explain briefly how should be the procedures

As it is a new treatment method to us, so we are wondering how is the procedure.

So can you explain briefly how should be the procedures including: pre-checking, diagnose, treatment etc. I mean, if the patient must go to your hospital first, then meet you and have a blood test or CT or scan.........? That is to say what is the steps ?

The reason I ask this question is that the patient is weak, so we want to know as much as information and make a better arrangement before going there.

Awaiting for your information.


Here is what the procedures should be

1- Make plans for travel and confirm the date before you purchase your tickets with me or my office assistant as she knows the dates I am out of the office or out of town
2- Gather copies of relevant clinical records like: initial tests for diagnosis of the cancer, like biopsy, PET, CT ,MRI scans or xray tests. blood tests including tumor markers and the latest copies of lab works and xrays, so you only bring a small package of papers with you
3- On the morning of your initial consultation, preferably come in a fasting state ( drinking water is fine) to my office where the interview, physical exam and review of your records will take place. At the end of this talk the patient is asked to pay for the consultation and the IPTLD treatment (cash, VISA or MASTERCARD)( NO traveler checks accepted)


You will be treated with the Insulin Potentiation Targeted Low Dose treatment or IPTLD protocol, and this means that the insulin to be administered is calculated using the pre treatment blood sugar as this is effective, accurate, safer and more potent approach.
If you were told by the IPT doctor that the protocols are the same - IPT and IPTLD- , it is not accurate, the IPT protocol, in use by all IPT doctors I have trained, calculates the insulin to be administered depending on body weight and not always the body weight on the morning of your treatment.
Posted by Dr.Donato Perez Garcia at 7:35 PM No comments: Links to this post

Why Cancer should be treated as a chronic disease

Among one of the problems with cancer treatment today is that doctors and patients seek the fastest solution in the shortest time frame.
Cancer must be viewed as a chronic disease, needs long term treatment, managed care, an exercise program, adequate body rest with good sleep, dietary guidelines and water intake, daily medications and spiritual help.

If patients from the very beginning were told about this and the treatment offered also developed for this purpose, I am sure that there will be less recurrences, less complications, less depressed people, and much more stories of real long term remission or cancer free patients for the rest of their lives, not for 5 years.
Posted by Dr.Donato Perez Garcia at 7:23 PM No comments: Links to this post

See who is not Certified to practice IPT/IPTLD

Promote Your Page Too 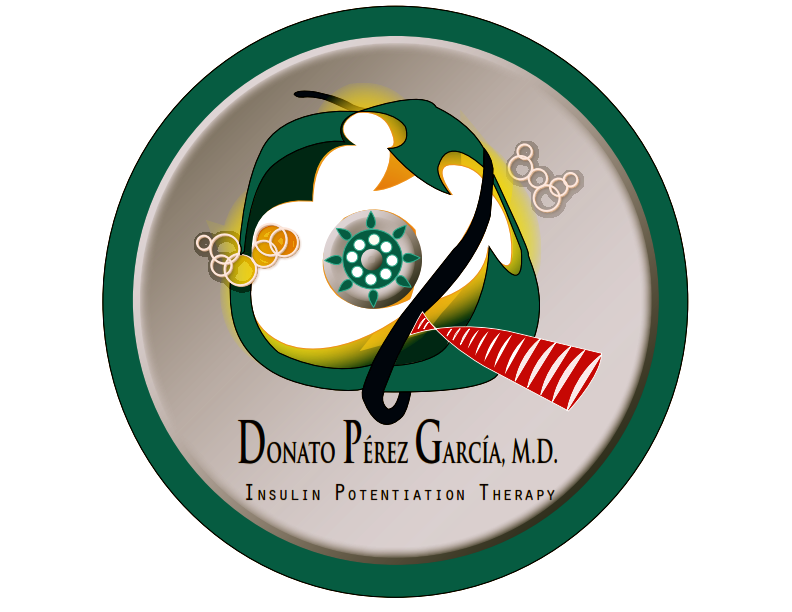 LINKS for IPTLD treatment for Cancer and Chronic Diseases